The Rainbow Road to Oz 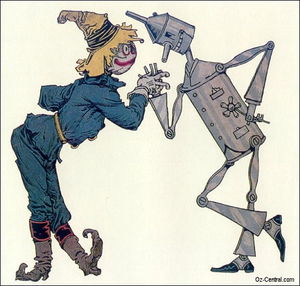 The show opens on a Kansas farm from which Dorothy and her pet dog, Toto, are blown to the Land of Oz by a tornado. Dorothy's farmhouse lands on the Wicked Witch, and the Munchkins proclaim Dorothy their heroine for setting them free. Dorothy wants to go home to Kansas. Locasta, the Witch of the North gives Dorothy a magic ring and tells her to go to the Emerald City to ask the Wizard of Oz to send her back to Kansas. Dorothy also gets a love interest when Sir Jellio Jamb, the royal poet of Oz, falls in love with her. Now, it so happens that a Kansas streetcar conductor named Pastoria, along with Ozma, his adopted daughter, has been blown to Oz in the same tornado. To make matters more complicated, it turns out that Pastoria is the former King of Oz, having been ousted by the Wizard. Pastoria determines to regain his throne. Other characters are an Ophelia-like lady lunatic named Nimmie. Who has gone "mad" searching for her long-lost lover, Niccolo Chopper, and the Wogglebug, who sees through the Wizard’s tricks and threatens to expose the Wizard as a fraud. Dorothy and her pet dog proceed on their journey and meet the Scarecrow and the Tin Woodman (who happens to be Nimmie's lover turned tin). Meanwhile, Pastoria encounters a cowardly lion. Dorothy with her friends and Pastoria with his entourage all stumble into a deadly Poppy Field where they nearly perish from the poisonous breath of the flowers. Everyone is saved by the Snow Queen, who creates a summer snowstorm to break the spell of the poppies. Dorothy and her friends arrive in the Emerald City where the Wizard grants brains to the Scarecrow and a heart to the Tin Woodman. To celebrate, the Wizard announces a ball to commemorate his retirement as king. Pastoria arrives in the Emerald City and stages a coup in which the Wizard of Oz is arrested. Dorothy and her pals are declared enemies of the state and they run for their lives as Pastoria regains the throne of Oz. In hiding and in disguise, Dorothy and company flee the Emerald City. They encounter Nimmie who is delighted to have found her missing tin lover. Dorothy and her friends arrive at Glinda's palace and are welcomed. There are great celebrations, with Glinda promising to send Dorothy home.